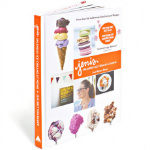 While at last night's preview of the new 12South Jeni's Splendid Ice Creams scoop shop, the Nashville Scene's Dana Kopp Franklin had the opportunity to visit with founder Jeni Britton Bauer and found out that she is working on a follow-up to her James Beard Award-winning cookbook, Jeni's Splendid Ice Creams at Home. According to Franklin, "[t]he new cookbook will include ice cream recipes but will also broaden the focus to include other desserts that go with ice cream, including recipes for cakes and homemade versions of Jeni's Gravel." No title yet, but it's expected to be released next summer. [Nashville Scene]