Here Now, a First Look at the Menu For Upcoming 12South Restaurant Josephine

Share All sharing options for: Here Now, a First Look at the Menu For Upcoming 12South Restaurant Josephine

Behold, the menu for Josephine, one of the most hotly anticipated restaurant openings of the fall. Executive chef Andrew Little, who previously helmed the well-regarded (and now shuttered) restaurant at Sheppard Mansion in Hanover, Pa., sat down with Eater to talk about the menu and what people can expect from Josephine, his cooking philosophy and the importance of restaurant labels.

So people have been wondering what type of restaurant Josephine will be, and now the menu is out there. How would you describe the concept?
First off, this is a really good rough draft. There are things that will change, but I think this gives people a really good idea of what we're doing. But then you have to talk labels, what kind of food are we doing. I've thought a lot about labels and what that means, and I think it's good to have them because it gives people an expectation. You say you're a Southern restaurant, or French, or Indian, there's an expectation, people know what their getting into. And I don't want to shy away from it. This is an American restaurant. But the issue with calling it an American restaurant is narrowing down what is 'American,' because it's so many different things. So for me, I thought we would call it an American restaurant because it's a 12South restaurant, it's a Nashville restaurant. But the biggest thing is to define what people can expect in terms of food. From a service aspect and the restaurant as a whole, it will be welcoming and comfortable, some place they are hopefully going to want to go to on a Monday, and come back on a Saturday. From a food standpoint, they can expect that the menu and the sourcing has been very well thought out. 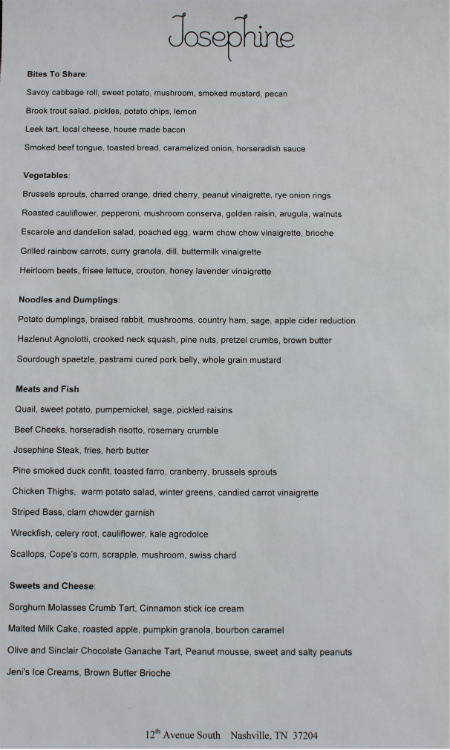 It gets quite a bit of use, but do you consider what you're doing at Josephine 'farm-to-table?'
We're not going to say we're farm-to-table. We're going to say that we are doing a thoughtful job of sourcing and from there, take it and use our own personal experiences. We do have a responsibility to source well, that's going to be the basis for the menu, but I think when you get into a situation where you have fast food restaurants talking about whose catching the fish for their fish sandwich, the whole idea has jumped the shark a little bit. I think what we need to do is embrace the fact that there are a lot of great purveyors and farmers in the Nashville area, and we're simply supporting them. We're going to buy the best product that we can and we're going to prepare it in a way that maintains the integrity of that product.

Since moving here at the beginning of August, how much has living in Nashville already informed what you're doing?
Oh, a lot. The other night I stumbled into the Ernest Tubb Record Shop on Broadway and they had a bluegrass band in the back. I had never been in there, didn't know there was going to be anyone playing, and I stood there for 20 or 25 minutes just listening. And thought this is just as inspiring from a menu standpoint as almost anything I could be doing right now. Because it really gives you that sense of place. I wasn't born in Tennessee, I was born in Pennsylvania, but I'm from Nashville now, and that matters, the energy of the city matters. I spent my whole life up until now in the Northeast, so you can't say that where you're from doesn't inform what you do on a daily basis. But also, if you want to evolve in any way, you have to take a look at where you are now and then use all those experiences to get to a place like this. There are things like scrapple on the menu. So for the type of cooking I like to do, and the type of restaurants I like to go to, I want places that are true expressions of their area. And the thing is, I'm from Pennsylvania, and I live here now, so it's still an expression of the area. And maybe people will be like, "Hey, we really dig that." And to me that's a growth and an evolution aspect that I'm pretty excited about.

And you know, this is an album cover, basically. There is a lot of personal influence that goes into writing a menu. You put it out there, and you're putting yourself out there. Every restaurant service is a live performance. I don't ever want to lose where I'm from, but I want to grow from that.

In terms of menu specifics, will menu changes be seasonal? How often will items roll on and off?
We like to look at the menu as a little bit of a fluid document. Certainly it's going to change seasonally, and when we go to the market or a farmer comes to the back door with a certain product and knows their going to have it for a fair amount of time, then we'll work to see how we can get it on the menu. It's going to be fun and interesting for me to go through late fall and winter here, very different from Pennsylvania, so I can see those ingredients coming in. You see a great product with a great story, you have to get it on there. Will there be massive overhauls of the menu? No. But if someone comes in and says this particular season is starting, and I'm going to have a great product for two weeks, we're going to get into it. And it may not necessarily show up on the menu. We might just announce it through social media, or it could just be a verbal from the service staff.

And it's also important to me that on this menu you see cheeks, you see tongue. Cooking and eating offal is very gratifying for me. And from a philosophical standpoint, I came from a restaurant that had a pretty remarkable beef farm. So the life of that animal needs to be respected, and to do that you have to use as much of the animal as possible. And we're going to make an effort to showcase some of those products. But it's not meant to be a shock factor, it's meant to be on there because it's delicious, and it also serves a purpose. If an animal is going to give its life so we can eat it, we ought to do the best we can to eat all of it.
· Nashville's Six Most Anticipated Fall Openings [ENSH]
· All Josephine Coverage [ENSH]