Just north of town, the city of White House, not known as a hot spot for dining, is about to get a shot in the arm, as Moli'Pazzo, an Italian Bistro, is set to open. Frank Aloise, most recently the Director of Culinary Operations for Atlas Concepts, and Jessica Laveck, formerly the executive chef at Atlas Concepts' recently revamped The Pavilion on Demonbreun Street, are behind the project, which is said to feature "homemade pasta and pizza, home-style classic Italian & Sicilian Dishes, sandwiches, salads, and more." The restaurant will also have a wine bar and offer craft beer. Open seven days a week and serving breakfast, lunch and dinner, its slated for a March opening.

So this now begs the question: what will the fate be of Atlas Concepts' current and future local projects? Eater recently received word from several former employees that a mass exodus from the company occurred locally, with Aloise and Laveck part of it, along with members of the management team. 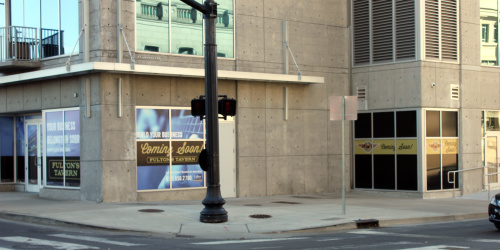 President Luke McKee went on a tear last summer, announcing the opening of five new Nashville restaurants and bars, including the revamp of Demonbreun's Red Rooster into The Pavilion and Industry at the Pavilion, and next door neighbor El Camino's Taco Lounge, as well as coffee shop Second Wind and pub Fulton's Tavern, both slated for downtown's Encore condo building. Second Wind was originally planned to open last August, but the project got behind, reportedly due to contractor issues. And the announced 4,000-square-foot future home of Fulton's Tavern, located on a prime corner directly across from The Southern, has sat idle since last summer. Have any inside info on the status of these two projects? Please do send it on to the tipline.
· Moli'Pazzo [Facebook]
· Frank Aloise [LinkedIn]
· Atlas Concepts [Official Site]
· All Luke McKee Coverage [-ENSH-]
[Jessica Laveck and Frank Aloise; Photo Facebook]

Want to Write for Eater Nashville?