Well it certainly looks like the problems are piling up for Atlas Concepts and its president, restaurateur Luke McKee, as it appears that The Pavilion Kitchen & Bar and El Camino's Taco Lounge have been closed. Located on the popular Demonbreun Street nightlife strip, The Pavilion, which McKee re-concepted to take the place of Red Rooster, opened just this past August, with El Camino's opening right next door in October. A turn-off notice from Nashville Electric Service (on door in above photo) for non-payment of bills was issued over the weekend, and a peek inside both restaurants shows them to be abandoned and in disarray. This follows on the heels of Atlas' local culinary director Frank Aloise leaving the group, along with other members of the management team. And McKee's previously announced Encore condo building projects Second Wind and Fulton's Tavern certainly look to have stalled. Have any additional details? Send them on to the tipline. 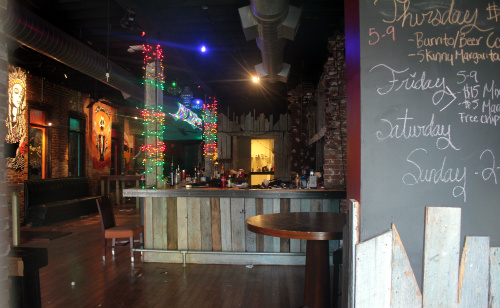