Some pretty significant changes are afoot at the Nashville Farmers' Market, particularly in the Market House, the property's onsite collection of restaurants and shops. To start, Jeremy Barlow's 12 South sandwich shop Sloco expanded to the market back in June, taking over the former home of chef Arnold Myint's AM@FM. But now word is out that, among other planned new additions, The Picnic Tap, the market's first business to serve beer, is about to get under construction, and that a third outpost of Jeni's Ice Cream is on deck for approval to join as well. Market Director Tasha Kennard, who took over the top position back in January, says this is all part of their strategic plan:

With the ballpark opening next spring, it's an exciting time to be in the North Nashville and Germantown area, and there is a lot of interest in bringing new concepts to the market. So we are taking a phased approach inside the Market House, increasing the diversity of menu offerings, working with merchants that source locally and helping to implement a green market program to decrease waste and improve the recycling program. 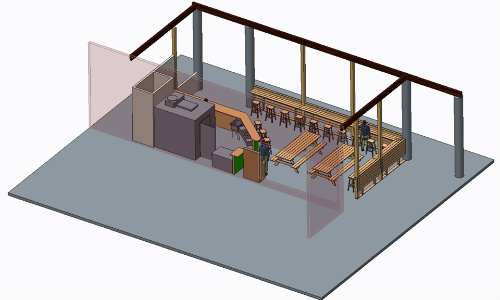 Construction is set to start August 4 on The Picnic Tap, recent Houston transplant Eric Woodard's first foray into the restaurant world. With an opening planned for September, the 35-seat concept will be located on the currently vacant section of the 'red wall,' which is on the 8th Avenue side of the Market House. On hand will be 15 rotating taps, with growlers to go, as well as a 'picnic-style' menu featuring locally produced, meats, cheeses and breads. Kennard says that having Picnic Tap open after Sloco was "a very strategic decision, because for the market to attract increased foot traffic, we need to expand our evening hours, and once he begins to establish his business, we'll have that opportunity." She expects hours for all vendors to be adjusted by March of 2015, with the market staying open until 10 p.m. on a regular basis.

Additionally, Music City Crepes and Leo's Sushi will lose their kiosks and build out permanent spaces along the 8th Avenue side as well, with Leo's changing its name to Bibimbap and switching over to a new menu, offering up bowls of the signature Korean dish, as well as various rolls. Vendors who typically used that area, such as Legato Gelato, Professor Bailey's and Poppin' Chicago Style, will set up shop in Farm Shed 2 starting August 4 to make way for the construction.

And later next month, Jeni's Ice Cream and an as yet unnamed concept that Kennard says is based around burgers and salads, will go before the market's Board for approval. If received, leases could potentially be signed that day. So be sure to check back for more updates.
· Nashville Farmers' Market [Official Site]
· Sloco to Open New Cafe in the Nashville Farmers' Market [The Nashville Scene]
· The Picnic Tap [Facebook]