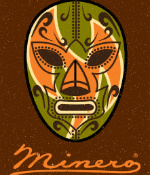 Sean Brock's upcoming Mexican-inspired restaurant now has a name: Minero. Eater Charleston reports that a local graphic designer working on the project revealed the name and logo (perhaps a little too early, as the post has now been taken down). On what a 'minero' actually is: "the name is spanish for miners — mexican miners used to wrap their explosives in paper and called them tacos." [-ECHS-]
[Photo Eater Charleston]